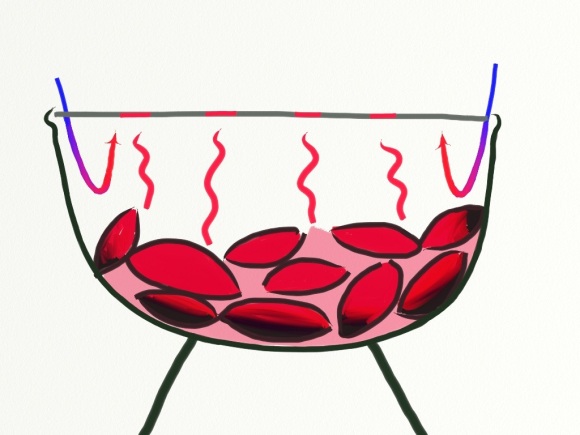 Heat can be defined as “energy transferred from one system to another by thermal interaction”(1). The first system would be the cooking medium producing the heat (ignited gas, hot metal, hot water, etc.), while the second system is the food we are cooking. This transfer of energy results in a chemical and physical change to the food. This ultimately makes the food more edible: the food is usually softer, hopefully tastes better, and is easier to digest, thereby providing more calories. Food also lasts a little bit longer after being cooked: almost-spoiled chicken will last as cooked left-overs for a few more days.

There are three basic ways that heat can be transferred (“thermal interaction”):

The grill pictured above represents all three of these methods: the hot coals radiate heat, the hot grill grates conduct heat directly into the food (those nice sear marks), while air is heated and rises toward the food, providing convection.

Let’s look at some more cooking methods and define the type of heat transfer that occurs.

Frying an egg, or anything in a pan primarily utilizes Conductive heat transfer.

The pan is heated by the heating element, contact with the pan transfer heat to the food. Simple. Conductive heat is a very efficient way of transferring heat, which makes sense if you consider it is much quicker to pan-sear a chicken breast than to roast it in the oven. 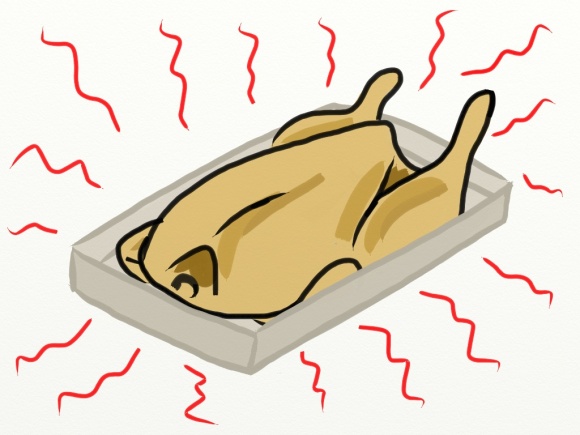 The heating elements heat the air inside the oven, which then transfer the heat to the food. This is a considerably less efficient way of transferring heat, since that hot air is just randomly moving around in the oven, and much of the heat is not transferred to the food. One way of making this heat transfer more efficient is by introducing convection into the cooking process.

Anything cooking in a pot of boiling water is subjected to Convection heat transfer. 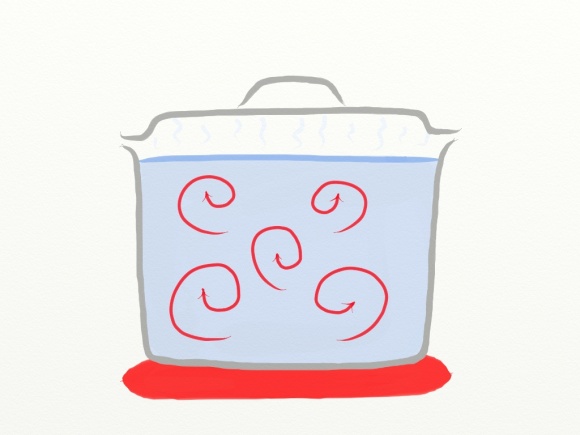 Of course, the submerged objects are also subject to conductive heat transfer (boiled chicken cooks faster than roast chicken, even if the oven is hotter), but the convection makes the cooking much more efficient. A food cooked at a rolling boil (212 Fahrenheit) will cook quicker than food in water just under a boiler (211 Fahrenheit), even though the temperature difference is negligible. That is because the convection, or movement of hot liquid/air results in the food being exposed to more heat. As the hot liquid comes into contact with the cooler food, the liquid is cooled as the heat is transferred into the food. The cooler liquid might just sit around the food, as it is heated by surrounding water and continues to transfer heat to the food. This makes for a longer cooking time. If convection is introduced into the cooking, the liquid is constantly moving, which means the food is in contact with hot liquid the entire time, therefore heat transfer occurs more quickly. This is also true for a convection oven: the hot air is circulated around the food, so the food is in constant contact with hot air, making the cooking more efficient!

Next time on Apply Heat: we’ll talk about wet vs. dry cooking methods.

Paste this link into your feed reader to subscribe